The Desert Boot is maybe one of the most iconic boots of all time. It’s definitely the most iconic chukka boot, no doubt about that. But what’s the deal here? Why are these ordinary suede boots so popular? In this Clarks Desert boots review, we are going to find that out.

When it comes to versatility, nothing comes close to the Desert boot. This was originally worn by the British Army. But didn’t took too long to become a cult classic because it was the perfect casual dress shoe.

Clarks has always been the number one go-to brand for desert boots. It’s a classic British shoe company or should I say a monumentally successful shoe company founded in 1825.

These boots were originally made in Britain, but now they outsource their manufacturing process to Asia. Don’t worry though, the upper of these boots still uses leather and suede from Charles F stead tannery.

Even though most materials and construction have been outsourced, they still use the same leather for that same tannery that used to supply materials for the original and the classic Clarks Desert Boot. This boot is still Clark’s most affordable suede boots. 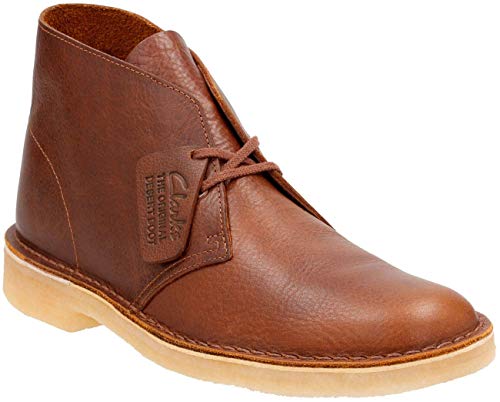 Clarks still is one of the most influential brands in Britain. Nathan Clark spearheaded the development of these boots who also happen to be the great-grandson of the founder of Clarks.

History Behind the Desert Boots

In World War 2, Nathan Clark was stationed in Burma where he noticed local soldiers were wearing boots with suede uppers with crepe sole. Their boots were meant to be worn for the desert climate in Africa’s Western Desert Campaign.

It didn’t take too long for Clark to love these boots. But he had trouble at the beginning because these boots were associated with the lower class, and because of that, he had trouble selling the idea because suede and crepe are not for elegant gentleman.

Later on, he got in contact with influencers and movie stars in the US, and in the late 1940s, these desert boots became a huge hit. When he first came to Chicago to exhibit his shoe idea, people, in general, loved it.

At that point in time, people thought it would be a more casual boot alternative and thus got a lot of positive feedback and encouragement. Nathan went back to England, started producing the Original Men’s, Desert Boot.

But those boots were only sold exclusively in the United States. The original boot had a sand-colored suede because it closely resembled the sand in Egypt. Hence the name Desert Boot.

It really made sense at that point — sand, desert, classic outdoor chukka. In the 1950s, these boots because very popular. Even the Beatles wore them.

Since these are chukka boots, laces are out of the equation. Unlike traditional chukkas, the ankle height is 10.5 cm, which is about as low as it gets. Well, less than that and you won’t be able to call this a boot.

It has an open lacing design that gives this boot an archaeologist but then again, these are meant to be super informal. Everything about this boot screams crazy. You don’t want to wear them with khakis or slacks.

The crepe sole, light and thin construction, suede leather, goes well with chinos and denim. It might look like a carpenter’s boot, but it does have a lot of pros. While it doesn’t look formal, it is environmentally friendly, soft, and lightweight.

The most popular material for leather is Oakwood Suede, which also makes the desert boot good for warm weather. However, it’s not waterproof, and you need to treat the leather to keep its natural look.

It does age well, though, the original suede was provided by the famous C.F. Stead, but now even the suede is made in Vietnam.

I know it’s not the best looking or the toughest suede out there and I don’t want to compare it with some 300-ish boots. If you are the type of person that spends a lot of money on boots and expect top-notch quality, this isn’t the boot for you.

This thin boot doesn’t have much structure, but it’s soft, breathable and makes for a good warm weather chukka boot.

The plantation rubber soles, also known as crepe sole, is a cheap form of natural rubber which is very soft and comfy. It’s a crude rubber that is sensitive to the elements and temperature.

It’s an environmentally free sole. The manufacturing process involves less waste because you can tap rubber trees for rubber and don’t need to cut down or kill any rubber trees.

The downside is, these soles get dirty quickly. Crepe sole just loves to suck up everything it touches. After a long day, expect small hair and pebbles embedded in the sole.

The traction isn’t good either. It slips in wet conditions and water easily gets in because the sole actually absorbs water. Well, I’m not too surprised because these are desert boots and not monsoon boots.

So, they are not made for wet environments. And because of that, they are also sensitive to cold. However, these boots are resole-able.

If you are a sneaker guy, order a half size down from your usual sneaker size. And they only have one width available. Also, keep in mind that suede stretches very quickly.

Apart from size, there is no doubt that you will feel comfortable in them. Although they have little support or stability, you will feel like you are wearing slippers and not boots.

Despite all the negative comments about how light and thin this boot is, there is no doubt that you will get a lot of compliments because of the looks, the shape, and simplicity.

People like them, still wear them and that goes to show you why Clarks desert boots are so iconic. Hopefully, you have found what you are looking for in this Clark’s desert boots review.

This site uses Akismet to reduce spam. Learn how your comment data is processed.